Many will remember John Zaradin when he lived in Odell - now in Spain, he sent this link to a Finnish orchestra playing his beautiful Suite No 4 for Guitar and String Orchestra:

For our cousins in Concord MA and elsewhere in the USA

Odell - where is it?

Odell - The Village (by Tricia Hudson) 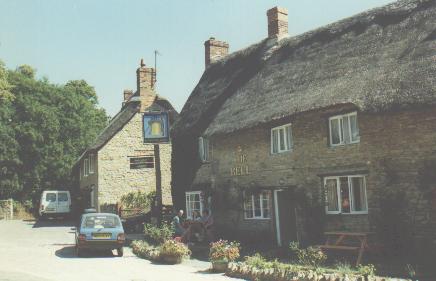 The Bell - on the village green

The village of Odell is one of the smallest of the Ouse valley villages, with about two hundred households. Though small, it is a lively, thriving community in which every age group is represented. Odell is situated in the north of Bedfordshire, near to the borders with Buckinghamshire and Northamptonshire, and the influence of these counties can be seen in Odell’s old association with lacemaking and, more recently, the leather industry. It was very much a farming community, with much of the land belonging to Lord Luke of Pavenham and Odell until the nineties, but more recently the village has attracted people working further away.

Changes to the village have been gentle, and easily absorbed. New building has been subtly integrated with the old limestone and thatch buildings, and newcomers to the village have likewise been welcomed into the social scene. But, whatever changes occur over the years, Odell never loses its individual character which has grown out of its history. Reminders of its feudal past still exist in its Castle, (not fortified), and the Manor House, and indeed many of the villagers were in the employment of Lord Luke until recently. In his book "Down the River" H.E. Bates sees the "Ouse Valley " people as still being in "feudal servitude.......still in bondage to the land". However, appearances belie the true character of the Odell folk who have always been far from subservient. Indeed, it was from All Saint’s Church in Odell that the Reverend Peter Baulkley led his dissident flock (in rebellion against the Church under Archbishop Laud) to new pastures in the U.S.A., where he founded Concord, Massachusetts in 1635. The close relationship between Concord and Odell is still kept alive by many villagers, and in 1984 a large party from Concord visited Odell to rediscover their roots.

The church itself is a building of great historical value, dating from the fifteenth century and built in the perpendicular style. The records of the incumbents date back to 1220, suggesting that this was also the site of an earlier church. Of particular interest, the church houses several windows containing ancient stained glass (currently under repair), a fine fifteenth-century rood screen and - of more recent history- a memorial to Lieutenant Richmond who died when the R101 airship, flying from Cardington, south of Bedford, crashed in 1930.

The church and the castle are to be found, naturally, in a pre-eminent position at the pinnacle of the hill in Odell. It is just a short roll down the hill to the charming stone and thatch public house on the green - ‘The Bell’- with its warming log fires in winter and relaxing garden that runs down to the river , so popular in summer.

At the opposite end of the village there used to be another pub - ‘The Mad Dog’ - so named because, according to folklore, a cure for rabies was supposedly discovered by the landlord of the pub’ many years ago! Yet no account of Odell is complete without mentioning the lazy river Great Ouse which meanders alongside the village and gives a sparkle to the summer and ethereal mists in autumn. It has to be said however that this beautiful river is also prone to flooding in autumn and spring, which causes some minor inconvenience to road users!

Between the villages of Odell and Harrold lies the Harrold/Odell country park, with three lakes, a nature reserve and pavilion. The park is a peaceful spot and very popular with ‘twitchers’ as a great many species of bird nest here. The seasons are marked by the movement of geese as they fly to and from the park in strict formation, filling the air with their raucous call.

If you really want to ‘get away from it all’, the Great Odell Wood beckons, thick and deep, stretching from Odell to Podington. In spring the wood is a delight, filled with primroses followed by a sea of bluebells, and if the walker is careful not to disturb the peace of the wood, it is possible to catch a glimpse of muntjak deer through the trees

So, welcome to Odell, a jewel in the heart of rural Bedfordshire. It is not so much a village "half asleep...",inhabited by ".....soft spoken and soft thinking people", as described by H.E. Bates in "Down the River", as a village embued with a timeless natural beauty which is quietly cherished by all who live there.

More archives of the Odell Village and Church News - click below......