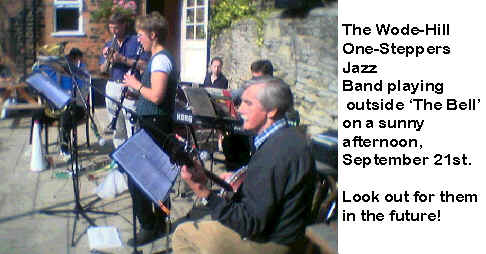 We were delighted to welcome the Handbell ringers from Biddenham to our meeting in September. They were formed about ten years ago and currently have 11 members though only 6 were able to be with us. They interspersed their very entertaining and informative talk on the history of bell ringing with a selection of music taken from all periods and styles including the Beatles, old folk songs and hymns. Members were then invited ‘to have a go’ and many did, perhaps not with quite such style but with great enjoyment. Our thanks go to the ringers for such an entertaining evening

We meet on Tuesday 8th October at 7.30pm in the Village Hall to hear a speaker from "Sainsbury’s."

There was a meeting of the council on Monday 16th September in the Village Hall.

1. We had hoped to have the street lighting repainted but after inspection by the County Council we received a letter stating that repainting was low priority, however further inspections would be carried out in the future.

2. Cllr. Sharpe will attend the next meeting of the Environmental Forum scheduled for the 25th September.

3. We were notified by the County Council of the Temporary Closure of BOAT No. 2 (White Lane) for a period of approximately 5 weeks.

4. Cllr. Crotty reported on a successful initial meeting with Celia Sellers, the new Highways contact for the parish. We hope this may mean our highways problems may now be more quickly resolved.

5. We have requested the clearance of the weeds on the path between the Mad Dog and the junction with Odell Road.

6. The Parish Council’s accounts have been submitted for audit.

7. We received a letter from the Environment Agency outlining its new notification system for flood warnings.

8. The Parish Council was pleased to sponsor a class in the Dog Show held in the Harrold and Odell Country Park.

Voting takes place in our village on 17th October 2002

Voting open to everyone on the electoral register.

Look out for information on other candidates to reach you by October. 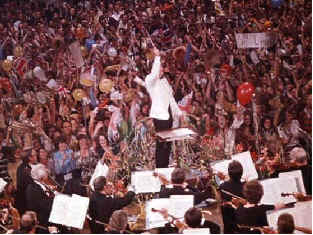 A small but select group of villagers met in the Village Hall on Saturday 14th September to celebrate the "Last Night of the Proms" in style. Odell "Promenaders" wined and dined while the musical entertainment was relayed from the Royal Albert Hall to a big screen in the Village Hall. A great evening was enjoyed by everyone who attended.

Dates for your diary 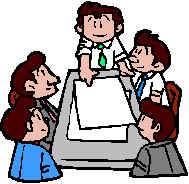 Start getting your team together for this popular event. Tricky questions, fun questions and even some easy questions; all waiting to be answered, with prizes for the highest scoring teams.

Sorry to mention Christmas, and it’s still only August, but we will be having a disco in the Village Hall; and only Ł2.50 a ticket! What better value way to kick start Christmas for a ‘fiver’ a couple.

Following last year’s event many of you have asked that we hold another "Open House". Bring your supper and a bottle, even a game or two, some music and see in the New Year. Is it really nearer to next January than last?!

We are currently completing an application for funding for our disabled access in the Village Hall. This is a time consuming process and we have a couple of other events we want to arrange before any works are undertaken.

Following another great performance, we have confirmed a date for this exceptional theatre group’s next presentation, which will be entitled "The Best Of Times". Get the date in your diary and watch out for details nearer the time.

We are also hoping to re- book the Ouse Valley Swing Band early in the New Year.

Do please support these events, and do suggest to us your ideas for alternative activities.

To Everything its Season.

Now we have reached the time of year when soft mists veil our early mornings with a cloak of mystery and cobwebs hung with dew sparkle in the hedgerows and branches lean under the weight of ripening fruit. My thoughts turn instinctively to the verses by Keats, who described this as the "season of mists and mellow fruitfulness". But Keats wrote at a time when seasons were neatly slotted into their rightful places – September marked the onset of autumn and December brought on winter chills. Now, it seems all that has changed; our seasons are no longer so stable and so well defined.

This year I had remarked that many of the August mornings had an autumnal feel to them and I well recall that in February a lot of my spring plants were in full bloom, as indeed they had been last year. I was interested, therefore, to hear of the recent reports on how our seasons are changing. 17,000 people in the U.K. have taken part in a worldwide survey enabling scientists to get a global picture of this climatic change. Spring, it seems, now arrives in February often with an unseasonable warm spell and then wanders on to finally merge with summer until autumn arrives on the scene. Autumn, too, is arriving earlier and September no longer marks the spot. The autumnal scene is also getting longer, often lasting well into December with migratory birds confirming the warmer back-end of the year by deferring their departure.

The Woodland Trust based at Cambridge has been responsible for recording our local seasonal changes and they report that this year we had an unprecedented early spring, three weeks earlier than 2001 which had also been early. This had resulted in many plants blooming ahead of their expected time which no doubt accounted for my own early flowers. Bees and butterflies had made an early appearance and the migratory birds had reached our shores well ahead of schedule. The catkins came early and bluebells carpeted our woodlands several weeks ahead of time.

Primroses and snowdrops, usually seen in February, now often put in an appearance before Christmas and migrant birds are leaving it later and later before their departure for foreign parts. Some birds, such as the blackcap and chiffchaff, have ceased to migrate at all. Instead of making their annual trip to Africa they now seem to prefer to settle down in the West Country, languishing in Dorset, Devon and Cornwall for the cold season.

Last year I can remember the leaves stayed on the trees much later than usual. Last November the leaves were still firmly on the trees and I can clearly recall that once my brother and I used to collect vast quantities of fallen leaves and store them well away before November 5th, keeping them dry before putting them on the bonfire.

On a slight tangent, I recently read that an altogether larger type of mosquito (armed with a larger bite) had invaded our shores. Taking advantage of our warmer summers they had flown in from southern Europe, with the result that many people who lived along the south coast suffered very sore bites. At the moment, I understand, it is not yet warm enough for them to breed here but if our climate warms even just a little this could change and we could find ourselves paying a very painful price for our warmer climes.

It is that dreaded season again and the practice will be holding clinics on the following dates:

If you are over 65 or suffer from asthma, diabetes, heart trouble, kidney disease or have an illness which lowers your immune system we would ask that you ring in to make an appointment. The practice will be taking bookings from Monday 9th September.

The practice would like to remind patients that dispensary working hours are Monday to Friday 9am-12.30pm and 2.30pm-7pm and Saturday morning 9-11am. A number of patients who turn up at the surgery outside of these hours are quite cross to find that the dispensary is closed. There is a good reason for the closure – this gives dispensary some protected time to make up repeat prescriptions with minimum interruptions.

The photograph of Daniel and Heather’s wedding was in last month’s magazine, but due to the poor quality of the reproduction we have printed it again.

The Corner Club aims to help adults with learning disabilities to be part of their local community. On Fridays, from 3:00 - 4:30 at Harrold Centre, we have a social club with various stimulating activities. In addition this summer, we have enjoyed making music with Soundbeams, held a Boccia Ladder Competition, had a trip on the Leighton Buzzard Railway and participated in Harrold Pit Run.

Can you help? - on either a regular or occasional basis with making tea, helping with music or craft or just being a friend. If you are interested, please call Doreen Wheeler ( 720358) or Lucy Clements 217812.

You really could make a difference!

and now for something completely different:

Me and My Girl

telling the tale of a cockney barrow boy’s climb up the social ladder; featuring the hits "The Lambeth Walk", "Leaning on a lamp post", "The Sun has got his hat on"….

….and look forward to our popular

Tickets Ł15, only available from Village Trader, or by post addressed to The Mill Theatre, Mill Road, Sharnbrook.

Can anyone help with this recent enquiry?

"My name is Ben Lyons and my family lived and worked in Odell from about 1830 until about 1910. This was my grandmother’s side – the Partridges.

The family are listed in most censuses as leather dressers, however my family remember them as employers (I can’t find exact reference in cenus for this) but this may be just the way the cenus is compiled.

At one time the Partridges ran the Bell pub in the 1880s and the story goes that they owned it and lost it in gambling along with a mill.

Later the family worked from both Harrold and Carlton and it is said that the works in Harrold was set on fire for the insurance money with some family running off over the water.

I still have family in the area with an aunt still living in a cottage which the family have lived in from 1890.

I would be most interested if you have any information on the trades in Odell as it may be that my family started a leather works, long before the Wesleys who seem to be credited with starting the first works.

Also any old maps from 1800 that detail the village.

At present I have about 100 Partridges in my family tree. However, as always there must be more as some ends are unfinished . If you know of anyone wishing to share information please feel free to pass on my name and address.