At Christmas we all love to hear the story of The Nativity and we recognise and welcome each familiar feature as the tale unfolds. One of the most magical and enduring of these legends is that of the Three Wise Men crossing miles of desert to lay their gifts at the feet of the Baby Jesus. Those wondrous events took place over 2000 years ago and were not recorded until long after the event.

How well does this particular part of The Nativity bear out in fact? According to modern historians, surprisingly well. The first mention of this epic journey appears in the Gospel of St. Matthew where he tells of The Magi bearing gifts. It is only later that they are referred to as The Three Wise Men or The Three Kings. Neither does he mention how many people there were – he refers only to The Magi.

Carvings on the walls of The Catacombs in Rome show the scene of The Nativity in several places and here The Magi vary in number between two and six – but they always carry three gifts. It is now believed that legend settled on the number of three men, one for each gift. In these carvings The Magi are always depicted wearing the robes of wealthy Persians of that period.

According to known history there was a religious sect called The Magi living within the Persian Empire which, at that time, occupied the area now known as Iran and Iraq. The nearest large settlement of this group lived at Babylon, some 750 miles from Bethlehem. As a group The Magi firmly believed in the coming of a great King and Saviour and as they were brilliant astronomers they believed that his coming would be foretold in the heavens, probably by a great star. They eagerly watched the skies for the first appearance of such a star and, in the event, would have had warning to set off on their long pilgrimage to Bethlehem. At this time a journey of 750 miles, riding on the back of an ass or a camel, would certainly have taken several months to accomplish.

According to legend the gifts were of gold, frankincense and myrrh – all very costly gifts at this time. Frankincense and myrrh were both precious and very rare, probably originating in the land of Sheba, today being part of Southern Arabia. In these early times Frankincense represented divinity; myrrh, although largely associated with death, was widely used for healing purposes and lastly we have Gold, representing royalty and kingship. What better gifts could The Magi bring?

Modern day experts now believe that time has blurred the original story but that the basic elements are still in place. The Magi – a people believing in the coming of a great King and Saviour and that his coming would be heralded by a star. Should such events have taken place, what would be more natural than for The Magi to set off to greet their new Saviour bearing valuable gifts representing kingship.

According to the historian David Hughes of Sheffield University, the legend of The Magi still exists in modern-day Iran and Iraq, the land once ruled by the ancient Persian Empire. Also lovely little legends attached to the journey of The Magi crop up in many of the towns and villages along the route that such a journey would most likely have followed.

May I take this opportunity to wish all my readers a Very Merry Christmas and a Happy New Year.

Unfortunately our speaker from Tesco’s was unable to join us due to family circumstances. We are therefore extremely grateful to our secretary Doreen Wheeler for stepping in at 24 hours’ notice. Two years ago Doreen started attending an evening class at Sharnbrook Community College in Stained Glass window making. She had always regretted that her front door had plain glass in it and had decided to remedy this; anyone passing this door can see how successfully she has achieved her aim. By the time she had learned the techniques involved and finished her windows she was bitten by the bug and has undertaken several projects since and obviously gets tremendous enjoyment out of improving her skills.

She is at the present time making small angels for Christmas decorations, selling them and donating the proceeds to The Corner Club in Harrold. She took us step by step through the process of making an angel, demonstrating the skills she has acquired, making it look relatively easy, as all experts do. Thank you Doreen for rescuing our evening so successfully.

We will meet on Tuesday December 9th at 7.30 p.m. at Rachel Halton’s for our Bring and Share Christmas Meal.

In January we return to the Village Hall on January 13th at 7.30 for an Open Meeting when all are welcome, big or small, male or female, to hear Richard Hall speak on the History of Thurleigh Airfield.

Our hostesses in January will be Mary Lee and Rachel Halton and the competition is ‘Make a paper flying object.’

The Corner Club now has 24 residential homes (mostly from North Beds.) on the register. Each home has 5 or 6 residents, most of whom have quite profound learning difficulties. So the money raised will help to provide more equipment and materials we use for the various activities we organise.

So, once again, many thanks for your support. It is much appreciated.

Work on the building of Harrold Priory’s new science laboratory was temporarily halted when some historically significant objects were dug up some months ago. The archaeological dig unearthed a sheep bone bearing ancient knife marks, lots of Medieval pottery, a spur, belt buckles and copper pins. The best finds will be on display in the science department in due course following cleaning and cataloguing.

Thoughts on One Hundred Years of Flight.

10.30am on December 13th marks the anniversary of "one hundred years of the birth of powered and controlled flight". The Wright Brothers flew four flights on this day in 1903 at Kitty Hawk Sands, North Carolina, USA.

Locally, there is a memorial plaque in Odell Church to Lt. Col. V.C. Richmond, designer of the R101 Airship which crashed at Beauvais, France, on 5th October 1930. Sadly it had only made that flight due to political pressure.

World War Two saw a huge increase in aerial activity over the area; first the Royal Air Force then the Americans from 1943 flying daylight raids from Podington, Thurleigh and Chelveston until April 1945 in Flying Fortresses.

It is ironic that Concorde has been retired but one wonders what people living in Odell will see go overhead in the next one hundred years?

Anyone interested in this subject and particularly in the 92nd Bomber Group stationed at Podington in World War Two may find the following three web sites interesting:

Old Photographs of Bedford and the Villages, c1900.

Available at the Victorian Fayre in Bedford, 5th – 7th December or you are welcome at 28 The Warren, Clapham. Just give me a call.

Also, if you have any Christmas Fairs etc. of your own and would like a supply of the photographs to sell on commission, please give me a call – as soon as possible so that I can ensure I have a good supply printed for you.

Black and White Revival: Preserving the Past for the Future. 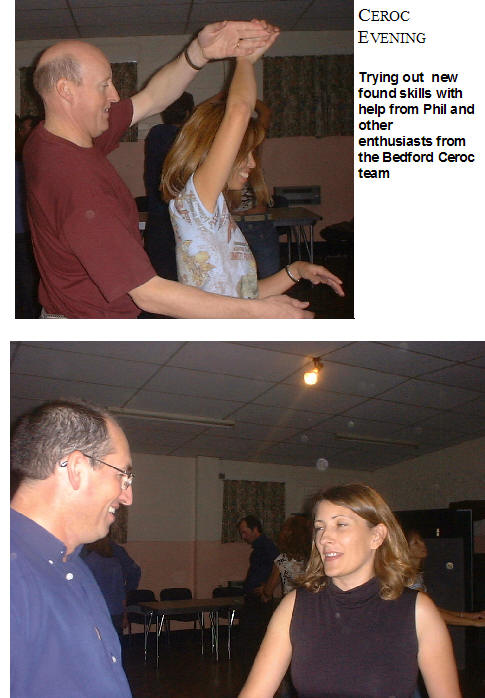 What a great night was had by all who attended the Ceroc evening. About 40 people, some in couples others single, were treated to some instruction by Phil and then tried out their new dance moves. Put together these moves gave everyone dance routines to suit all occasions. It was thoroughly enjoyed by everyone, a very sociable, enjoyable evening and great fun!! Thanks to Karen Fulford for the idea and arranging the event.

We will be having Phil (above) back again so watch out for details.

Dates for your diary

. You don't have to have young children to come along. It's open to everyone. We'll arrange some fun, bring a few eats and drinks for a communal table and enjoy a village Christmas party. Open from 6pm. Let us know if you can come and if you are able to supply some goodies.

We do ask that children are accompanied. Watch out for details. 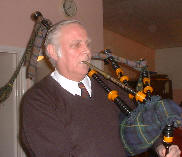 A two-course meal will be served, with haggis, tatties and neeps in abundance, and a pudding. The haggis will be piped in by Mr Martin Cameron on the bagpipes and the meal will be followed by Scottish dancing.

Any offers for helping prepare Tatties and Neeps gratefully received!

. We are pleased to be able to welcome this versatile band from Sharnbrook Upper School back to our hall. Ticket details available in the New Year

another revue by the Time of our Lives Music Theatre. Get the date in the diary and book your tickets early!!

. The annual quiz returns. Usual teams of up to 6 (not 7 Jonjo). Questions guaranteed not to have been used in Odell before!!

Thank you for bringing your waste paper to the bins. Though the return is small, every little bit helps financially and of course the waste is recycled.

Do please support our events, and do suggest to us your ideas for alternative activities. 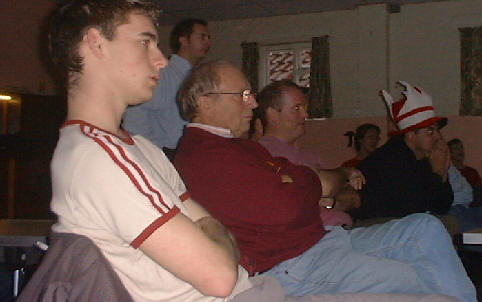 Well, we had to do it. With England in the Rugby World Cup final, an impromptu event was set up in the Village Hall on 22nd November for the 9am kick-off. Heather Lee and others prepared bacon butties and around 40 people gathered to watch the big match on a big-screen projection TV. Many thanks to Jim Schoenenberger for providing an extra amplifier at the last minute! The picture above shows the tenseness of the occasion as England’s lead against Australia was gradually eroded.

But as the match moved into extra time, Jonny Wilkinson worked his magic and the crowd erupted with jubilation as pictured below! 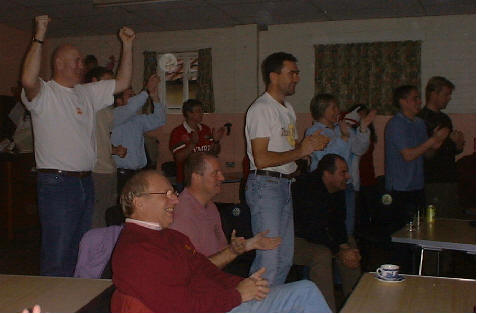 This will take place on Wednesday December 10th at 12.30pm for 1.00pm in the Village Hall. A traditional Turkey Lunch will be served so if anyone has dietary problems please let Roma know.

The final date for bookings is December 3rd and we apologise that we cannot make any exceptions after this date as we have to order the turkey etc.

If you have not had your invitation and would like to come please ring Roma Garon tel. 720431 by December 3rd.

Happy birthday to you all !

2004 marks the 25th Anniversary of the inaugural production at The Mill Theatre, Salad Days, in 1979, following the building’s acquisition and conversion from Hipwell’s flour mill, Stoke Mills, during the 1970s and its transformation into your local theatre.

Welcome to another special year in ‘The Mill’s’ history:

available from one month before:

Please send all entries for the February 2004 magazine to Tricia Hudson (patriciahudson@kbnet.co.uk), Anne Turner or Catherine Corkery by January 12th 2004 at the latest. May we remind you that the editorial team exercises the right to edit, shorten or alter any items that are submitted. Also, the opinions expressed in the articles are those of the contributors and are not the responsibility of the editorial team.

email is jh at ti.com - I put it like this to avoid spam! - just retype with the 'at' being an 'at' sign and of course no spaces.