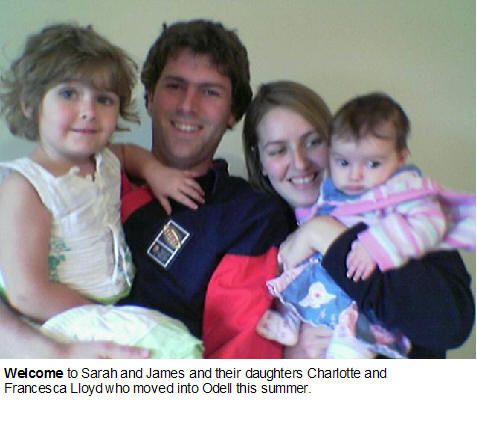 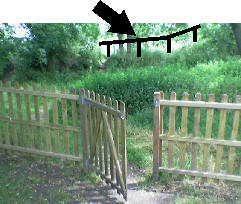 A sturdy fence was been erected to stop people crossing directly between the Bell and the river foot bridge. The land owner who has erected it may be entitled to do so if the mini fence erected by Greene King across the Bell garden has already been acting as an impediment to otherwise unobstructed regular public use for at least 20 years. Since it has a very pedestrian-friendly gate in it , most people think this is unlikely. The parish council discussed this on July 18th but were not prepared to do anything about it. A separate initiative will be launched to address the problem.  Watch this space. The Bedford council contact on such matters is adrian.fett@bedscc.gov.uk and tel  01234 228335

This summer has been a season of parts. The cold part, two warm parts, the triumphal part and the tragic.

We started off with the weather so cold and prolonged that many people began to ask whether we would have any summer at all. With the temperatures anchored firmly in the lower 60s things were looking pretty depressing and then, one morning, we woke up to find the temperatures were up in the 80s. Summer had arrived....accompanied by all those bizarre little events that could only ever happen in England.

At Frinton on Sea they had a plague of toxic

caterpillars. They swarmed across the promenade, along the railings and over the seats – everywhere - to such an extent that a number of people required medical treatment. A lioness had to be treated for sunburn. The theory was that as she was born in captivity she did not realise she had to take shelter from the sun. More than thirty thrill-seekers found themselves stuck on the top of a roller-coaster when the equipment broke down in the heat. The punters were left, strapped into their seats, in the sweltering heat, until they could be brought down to safety. A British Rail train broke down due to overheating in the middle of the countryside. Because there was no power the air-conditioning had ceased to work and the train just stood there in the searing heat. Due to Health and Safety regulations the crew refused to open the windows or doors with the result that the passengers all suffered from heat exhaustion. In desperation the passengers finally had to smash the windows and break down the doors to get out into the fresh air. Perhaps the strangest of all was at an athletics event held at Windsor. The Fire Brigade were called out to hose down the 1,900 athletes who, suffering from heat, found they could not compete. Wimbledon started amidst soaring temperatures and did a roaring trade with record sales of strawberries and cream. But do not let us get carried away - this is England after all.

Then came Glastonbury. The skies opened...the rain came down and soon the fields were awash, with people ploughing about in liquid mud

practically up to their knees. They called in bulldozers to scrape it away whilst the revellers took to the high ground and continued to watch the show! This was followed by the Live 8 concerts around the world and mass demonstrations in Scotland where Tony Blair hosted a conference with world leaders to discuss feeding the starving of Africa. All this was finally topped with the news that England was to host the 2012 Olympic Games and the

people were ecstatic. The

euphoria died overnight. With the morning came the news of the bombing of London Transport. The celebrations that had been marking the end of World War 11 and the Battle of

Trafalgar continued, however, and the celebrations concluded with the Queen leading her troops through the streets of London. Although this had been planned, it seemed like an act of defiance at the time.

But what of more local events? As usual we had a most successful fete followed by the barbecue, and the pensioners enjoyed their strawberry tea. Whilst in Bedford the authorities, hoping to have athletic and water sports facilities of world standard by that date, claimed we just might be hosting Olympic teams, at the very least for training sessions.

There was less endearing news about the proposed Wind Farm to be built at Podington, starting with 15 wind turbines, each at 125 m., making them some of the tallest towers available, all in an area of

flat land that is not particularly noted for high winds. After all, was that not why they had built an airfield on this site during the last war? The proposed area will extend to cover the top of White Lane and reach as far as Yelnoe Lane. Then, far less controversial, we welcomed Peter and Rachel as new landlords at The Bell.

Our near neighbours at Souldrop, it appears, are playing host to a number of peacocks! It had all started with just four birds but they have now been joined by another group of four peacocks, one of them being a pea-hen with a large brood of chicks. They roost in the woodland at the back of the village but come down into Souldrop to feed. The large, colourful, birds are meeting with a mixed reception, it seems; many residents wish to be rid of the birds whilst others want to keep them.

I am closing on the news that this year marks the 60th anniversary of the Odell Women’s Institute who celebrated the occasion with their annual barbecue in August. These al-fresco events held by the W.I. are

notorious for attracting torrential rain and thunderstorms but on this occasion we were blessed with a warm, humid, evening and the event was enjoyed by all.

I have ended, as I started...with the weather. How very British.

All senior citizens invited – please accept this as the only invitation.

The very friendly, outward going class has been running for two years and would like to welcome new students for the autumn term. A new term will commence on Thursday 15th September 2005, at a cost of Ł5 00 per class.

Complete beginners are most welcome; a non slip mat will be essential.

July saw us welcome Sheila Ward to our meeting. She was there to help us produce our own watercolour quickie. She went through the various stages of applying the paint and then it was over to us. I have never seen so much concentration on the members’ faces or had the hall so quiet. I would like to say that masterpieces were produced that night; what I will say is that I have never seen so many different interpretations of the same scene. It was a really enjoyable night. My paintbrush may be put away again but hopefully it has inspired others to carry on developing their skills.

August saw us have our annual barbecue. At short notice the venue had to be changed to Mandy Sharpe’s and we must thank her for

making us so welcome. This year this event marked a special occasion for us as we are celebrating the 60th anniversary of the founding of Odell W.I. We were pleased to welcome past members and friends of the W.I. and marked the occasion with a toast and a celebration cake. It’s good to think that the ideals that lead to the formation of the group by Lady Luke just after the end of World War II are still in place today - those of bringing together rural women in order to inform, educate and most important of all to form friendships for mutual support.

We welcome Jinder Sumal to the Village Hall on Tuesday 13th

September at 7.30. She is describing Indian Fashions and hopefully bringing some colourful and interesting examples to show us.

Hostesses are Stasia Wherrett and Kathy Dunn. The competition is ‘An Indian Curry Recipe’

Go batty or burn it up with the events in September. The events are free but if you can make a donation it will help us to run further sessions.

Contact us to book your place as there may be a limit on numbers.

Become a bat detector, and identify which species of bat hunt for insects around the different habitats of the Park.

Practical hands-on opportunity to learn about this ancient coppice-craft and make your own charcoal.

Come and join in with practical work to enhance the park for wildlife and visitors on the following date: Monday 26th September.

All tasks start at 10am and finish mid afternoon, but you only need stay as long as you want.

- On Sunday 26th June loads of youngsters (and a few not so young) enjoyed a Sunday afternoon of puppet making followed by a great puppet theatre show presented by Paul from Just Puppets. Paul held everyone spellbound and entertained the children with jokes and songs in a story full of weird and wonderful characters.

- we have finally secured a Barn Dance band for 8th

October. Tickets will be on sale from the usual sources at Ł6 and will include a Chilli and Baked Potato supper!! Tickets will be sold on a first come first served basis from the end of August!

- As the chilly nights start to draw in come and join us for another Odell Quiz. Usual teams of 6 (no more, but can be fewer for the brainier ones!) at Ł2 per head.

Goodness, that brings us round to Christmas!!

Our new planning application for revised entrance and disabled parking has been approved. Unfortunately the Lottery Fund has been reorganised and we will have to await the new programme in the Autumn before we can submit a new application. As part of our application we will be carrying out a small survey around the village to seek some evidence to support our application. I hope you will be able to assist us if we call upon you.

- Thank you for bringing your waste paper to the bins. Though the return is small, every little bit helps financially and of course the waste is recycled.

Do please support our events, and do suggest to us your ideas for

Due to popular demand, Alison Neil is returning to Odell, this time with her new one-man show, "The Shakespeare Ladies Club". Last summer Alison gave us a mesmerizing performance as Richmal Crompton, ‘The Just William Lady’. The date for this year’s

Alan Ayckbourn’s hilarious comedy, to be followed by:

The wonderful, seasonal, family musical by Leslie Bricusse, based on Charles Dickens’ "A Christmas Carol".

And looking forward to 2006 season:

12-20 May Return to the Hidden Planet Science Fiction musical

17-25 Nov Oklahoma! The most beautiful of musicals.

Please note that Elizabeth and Theo Gibbs are sorry that, due to personal circumstances, our show, normally on the 1st Sunday in September, will not take place this year.

owing to changes and improvements in the format of our forthcoming Programme there will not be a Christmas Revue this year.

Please send all entries for the October 2005 magazine to Tricia Hudson (patriciahudson@kbnet.co.uk), Anne Turner or Catherine Corkery by September 12th 2005 at the latest. May we remind you that the editorial team exercises the right to edit, shorten or alter any items that are submitted. Also, the opinions expressed in the articles are those of the contributors and are not the responsibility of the editorial team.